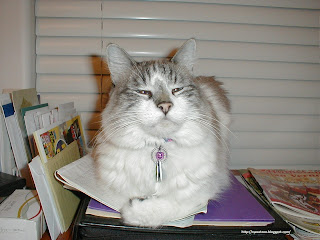 She has been part of the family since darn near the beginning.  I got her December of 1996, when she was about 3 months old.  My daughter was 2 at the time.  They have been inseperatable ever since.

It was in those early days that Flurrie showed how good of a human mom she could be.  Every night she would curl up at my daughter's back until she fell asleep.  She would then come find me, meow, and then go about her business.  It took me a few times to realize she was reporting in that all was well.

Flurrie has always been right there when any of us have been sick.  When my daughter had shingles (yes.. shingles at age 8), she stayed with her.  Even the smell of the vinegar soaks didn't push her away.  When my husband suffered cluster headaches (migraines at exactly the same time every day), she would curl around his head and purr him back to sleep.  When I am having a low in the middle of the night, she is right there in the kitchen with me.  She doesn't bring me Smarties, or juice boxes, but she is right there.  I just know she would go wake someone up if something bad happened.  That's just how she is.

She has tolerated the addition of other furkids, but makes it very well known that she was here first.  My youngest furkid, Taeya, can just be sitting there and if Flurrie walks past her she glares, hisses, and keeps walking.  If one of the other furkids is sitting by me on the couch, Flurrie will hiss and come back later.  She has turned into a ornery old woman, but she has earned the right to be particular.  After all she is 16 years old (84 in cat years) and has been there through EVERYTHING. 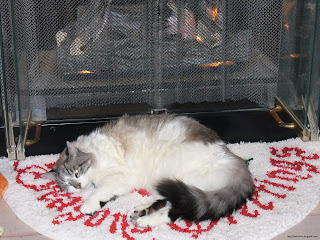