In my last (non wordless) post I talked about the adventure I was having in getting my CGM transmitter replaced.

I wish I could tell you that it was truly just two or three days later and I was back up and running.  It wasn't quite that simple.

Tuesday morning I called Mr. Supervisor to confirm that the fax had been received and that my new system would be shipped out that day.  All I got was his voice mail.  It wasn't until about 2:30 that afternoon that he called me back.  Yes, the prescription had been received and just about everything was in order.  The one problem... they didn't have any systems to send to me.

That's right, they were out.  Nothing but empty shelves.

Supposedly they had placed a large order of all supplies and equipment that was supposed to be delivered that day, but it was delayed.  They were hoping to get it on Wednesday.  That meant if I was lucky, I would see it on Friday.

Knowing how shipments usually work, I highly doubted that even if theirs came in on Wednesday that they would have it unpacked, logged, and ready to be shipped to customers the same day.  So I called Mr. Supervisor Thursday morning to see if it was sent the day before, or would be sent that day.  I tried again Thursday afternoon.

I tried again Friday morning.  I left another message.

No phone call back.

Needless to say, I was LIVID!!

The more the day progressed the more angry I got.  I had been trying to get my transmitter replaced for nearly two weeks by this point.  I had done everything I could without driving there myself and sitting there in the office.

By 2:30 Friday afternoon I had totally given up on Mr. Supervisor.  I called back to the main number to talk to one of the "regular people".  The gentleman that answered was truly that, a gentleman.  He didn't have any record of an order for me in his system, but since it was for equipment and not supplies that didn't surprise him.  He logged into the equipment section and saw that my order had been placed and shipped.  He confirmed the tracking number and said that it was listed as being "on the truck out for delivery".  I thanked him for being extremely helpful.

I called my husband to let him know that a box requiring signature, would be delivered soon.  He made sure he was at the house and called me as soon as it arrived... about an hour later. 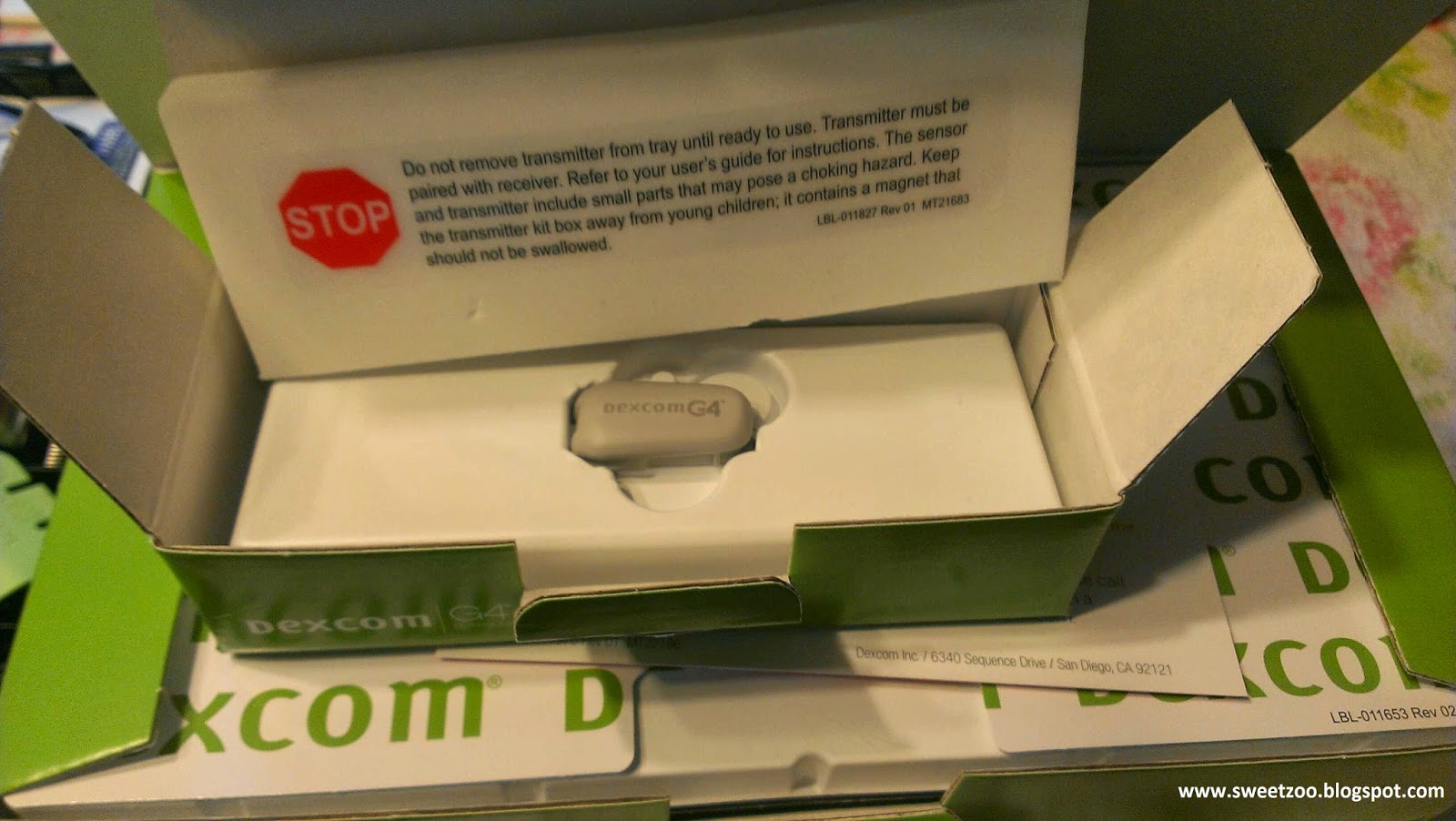 ﻿
After I got home from work and had all necessary chores done, it was time to start things back up. 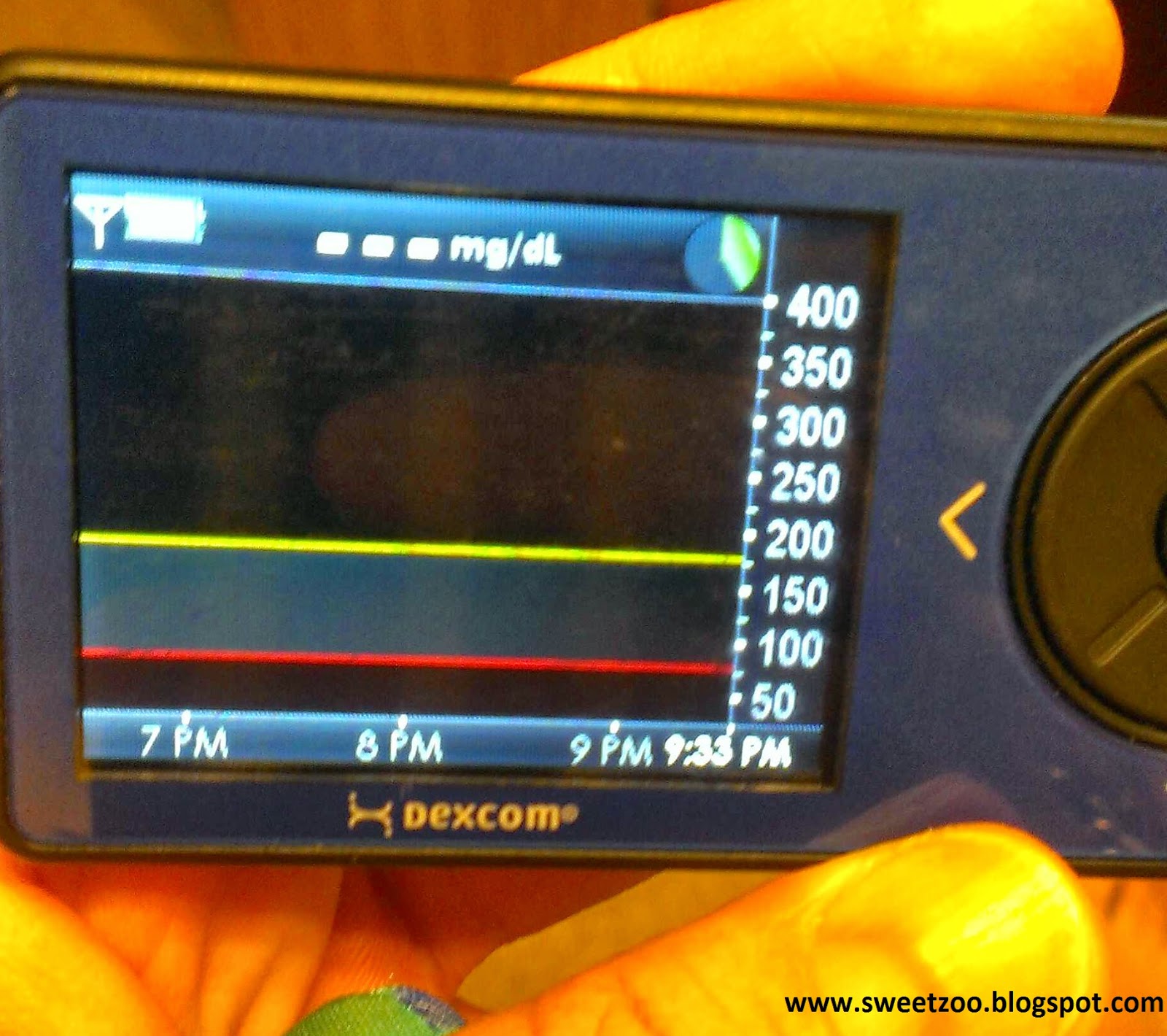 Two hours later I was back up and running.  I never felt so comfortable having a wire stuck in me and tape everywhere. 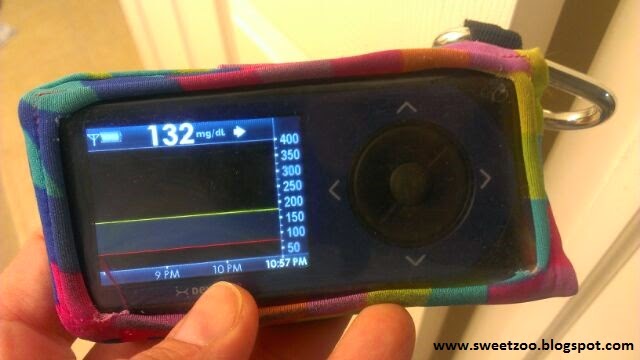 I learned a few things during my week of flying blind... but THAT is for another post.﻿
﻿
﻿
Posted by Jenn at 10:43 AM No comments:

I've been working on a post about my latest endo visit, but that will have to wait for a day or two.  This latest issue has me frustrated and wanting to throw angry ducks.

Last Saturday afternoon (March 8th), as I was relaxing in my favourite post church location (the couch with my book) my CGM buzzed.  It was a longer buzz than I was expecting, about the length of the "Hey.. I need charging" buzz.  When I checked him I saw the "Low Transmitter Battery" warning.  Sigh.  I knew this was inevitable and that I had been living on borrowed time.  In fact, my transmitter is over a year old.  He turned 1 in January.

So, I hunted down my manual and found the phone number.  I called Dexcom to order the replacement transmitter.  I was informed that my transmitter was well outside the warranty and that I would need to purchase a new one.  However, since my insurance company requires that I go through a third party supplier I would need to contact them.  Not a problem.  Ok, well, one minor problem:  It was Saturday and my supply company wouldn't be open until Monday.

Monday morning finally arrived.  My CGM had warned me two more times over that weekend that the transmitter battery was low.  I may or may not have told it to shush... each time.  I called my supply company and they said they would fax over the prescription request to my doctor.  Once they had that back they would order my new transmitter and all would be good to go.  I happened to have my three month endo appointment that afternoon, so I doubled checked with her to make sure she received the fax.

Now, my endo's office HATES the supply company I use.  They won't even put their brochures out on the counter because of the problems they've had working with them in the past.  The only reason I use them is because I have to.

I love my insurance company and fully understand and appreciate that I am truly blessed to have all the coverage I do with very very little fight (only the amount of test strips, but one appeal letter and all was good).  The one thing that irks me the most is that the supply company I first started with is not on my current insurer's panel, and my insurance isn't interested at all in adding it.

Anyways, back to the saga.

My endo never received the fax.  I called back to the supply company on Tuesday and was told that they would send it again.  I checked on Wednesday and was informed that my benefits had been checked and it looked like I was "good to go".  I requested a call back from the individual, Mr. B, who was working my case so I knew when to expect the box or if there was anything else I needed to do.  He never called.  On Thursday, I did the mistake of letting everything sit.  I figured that it was in the works and why should I be a pest?  I should have been a pest.

Friday morning I called for a status check.  I was told that Mr. B would have that update for me and that he should be in any minute.  I was transferred to his voicemail and I left a message.  This was 9:15am.  At 1:15pm I called directly to Mr. B's extension and left another message.  At 4pm I left yet another message.  At 5:30 I was livid!  I called to the main number and asked for the status on my order.  I was informed that the most recent order they had for me was from January.  UGH!!  I explained my story and the gentleman that I had was about ready to transfer me to Mr. B.  I told him that under no circumstances was he to do that as I had already left a total of 5 message for him this week and received no call back.  Mr. Nice Man told me that the supervisor was still in and he would transfer me to him.  Yay!!  Progress.  I then proceeded to sit on hold for 10 minutes.

Mr. Supervisor came to the phone and apologized for keeping me waiting for so long.  He said he was checking my benefits and that a new transmitter would cost me $62 but a new system would be $100.  Since my receiver was also out of warranty he recommended doing the new system.  I didn't have to use the new receiver right away, but it would give me a backup so I didn't have to deal with this hassle again anytime soon.  This was the first news I had been given on my benefits.  I was finally getting somewhere.  We agreed to the new system and I was informed that as soon as they received the prescription from my doctor the order could be processed.

I blew!  I told Mr. Supervisor that that was where my initial frustration began.  The prescription request that was supposed to be faxed to my doctor on Monday.  He apologized once again and said that they had been having "internal issues" this week that had made it a very long and tough week.  He acknowledged that it was no excuse for the run-around I'd been dealing with,.  He sent the prescription request to both the fax numbers they had on file for my doctor, as well as a copy to my email.  I was pleased.  IF.. heaven forbid.. but if my doctor never got the fax I could at least print it up and walk it in myself.

I checked with my doctor first thing this morning.  They hadn't had a chance to go through all the faxes from the weekend, but would call me if it wasn't there.  In their defense, I did call just 5 minutes after they opened.  I love my endo's office though, and I know they will call if they don't have it.  They did exactly that last week.

After all this I do believe that I may actually have a new CGM in the next two to three days.  I sure hope so.  I know people do it all the time, I even used to, but this "flying blind" business.. well, it is for the bats!
Posted by Jenn at 12:08 PM No comments: