Can you believe that it has been a year since the last #DBlogCheck??

I was scrolling through my blog posts a little while ago and came across my post from last year.  I know that time flies when you're having fun, and changing infusion sets, but A YEAR?!

Today is somewhat of a family reunion.  Ya.. I like that.  Every year my husband's family has a reunion the second Saturday in July.  I was not raised with annual reunions like that.  In fact, I don't ever recall having an official "reunion".  My family would get together every Thanksgiving and Christmas for dinner and games.  Nothing worked off dinner and readied you for pie like a game of horseshoes with my grandpa.  I bet you can still see the scars in the yards from where the poles were placed.  My husband's family has done a reunion every year.  It is a perfect time to catch up with everyone, meet new loves and children, pick on cousins, and try to get as many hugs as possible.  Not to mention all the food!

Not everyone in the DOC (Diabetes Online Community) is related by blood or marriage (some are and some will be), but that doesn't mean we aren't family.  Alana of Life on T1 put it best in this post:


"And that's what a chosen family is. It's a group of people who are there for you no matter what happens, who are there and they say "I get it, I understand, me too.""

Let's view today as our DOC Family Reunion.  Let's catch up with everyone, check in to see how we are all doing, and pass around those virtual hugs.  After all, you can never get too many hugs.

Change would be good

This month's DSMA Blog Carnival asks, "If you could change one thing about diabetes, (besides not having it), what would you change? Why?"

I have thought about this for quite some time.  There are many things that I would LOVE to change about diabetes.

Finger sticks - I know that it is the easiest location to get blood for a bg check, but my fingers get sore sometimes.  I have calluses so thick that I've used them as a thimble.

List of conditions that I'm now at risk for -  Going to a new doctor is never fun.  Filling out the medical history paperwork and seeing "Diabetes" printed in red is not a comforting sight.

Multiple doctor's appointments - I'm thankful for having a job that gives me quite a bit of "sick time" so I don't lose any pay for all my appointments, but I would love to take time off for something a bit more enjoyable.

Cost of medications - I feel very blessed to have the insurance coverage that I do, and that I don't have to argue with them (too much) to have everything covered (read: test strips), but I still have deductibles and co-pays that have to be paid.

Each one has it benefits and downfalls, but there is one that stands out above all others.

If there was only one thing I could change about diabetes would be the emotional aspect.

There are days when the blood sugar roller coaster is too much and I don't want to do it anymore.  There are other days when blood sugars are level all day, but at a low level, or high level, and no matter what you do it won't come up or down.

There are days when you begin to question yourself and your ability to manage this disease.  The feeling of failure can be very overwhelming.

However, it's the emotions that sneak up on me during a high or a low that are the most frustrating, and heart breaking.  I know I am very grumpy and short fused when I am running high.  Sometimes I don't know that I'm running high, but when it seems like everything is getting on my nerves and no one can do anything right, I try to remember that it is not them, but quite possibly me.  If I have been running high all day, when I get home I walk in saying, "I've been high, and I can't get it down, so I'm very grumpy.  Consider this your warning."

I don't know about you, but I wish I didn't have to do that.  I try my darndest to keep my emotions, and my mood swings, in check but sometimes I'm caught off guard.  It's not my family's fault but they are the ones that pay the price, and it is not fair.

So if there was one thing I could change about diabetes (other than not having it) would be that my emotions would not be so effected by my blood sugar levels.  There are enough things in the world that effect my emotions... I just wish diabetes wasn't one of them.
Posted by Jenn at 8:22 PM 3 comments:

Pain in the foot

I try to get a walk in every work day (I take the weekends off from walking as we usually do much more yard work instead).  During the late winter - late spring, I was able to walk at about 2pm each day.  It was GREAT!  Not only did it help with my post lunch bgs, but it also made the afternoons seem to go faster at work.  Once the afternoons started getting too warm, I switched to walking at 10am each day.  That time wasn't so bad.  I was able to walk off my coffee but the rest of the day went so much slower.

Then full on summer hit.  Even 10 am was too warm.  If I tried to walk any earlier, after getting to work, I would be setting my stuff down and walking right back out the door.  Not only is that silly, but it was too hot then too, and we don't have a shower at work for me to use.  So I decided early morning walks would be better.  I set my alarm for 5:30 and vowed to not hit snooze.

I've not been as consistent as I wish I was.  I know that the walk does me so much good.  Not only do my blood sugars behave more throughout the day, it really helps my mood too.  I've had a difficult time getting to bed before midnight lately, which of course makes 5:30 really REALLY early.  However, the last two days I've been able to do it.  I even got sprinkled on yesterday.  Real rain drops!!  We've not had any measurable rain since early May here, so every rain drop is sacred.  Anyways, my pace in the mornings isn't as fast as I was getting in the afternoons, but at least I'm walking, right?  But for how much longer, is the question.

The last few days my heel has been downright killing me!  I've dealt with plantar fasciitis before and I wouldn't wish it on anyone.  I fear that it may be setting in again.  Unfortunately, if I remember correctly, there isn't a whole lot that can be done.  Last time I had my heel and foot taped for a couple weeks, and that helped a lot.  Will they do that again?  Will he suggest it's time for a cortisone shot?  *cringe*  I have no problem with shots, but the thought of one in my heel gives me the heebie jeebies.  Or will there be a miracle cure that happens as I walk through the door?  I'm not holding my breath or anything, but THAT would be nice.

I will be calling my foot doctor later today to make that appointment.  In the meantime, please pass the ice pack.
Posted by Jenn at 1:14 PM 2 comments:

I realized that a typical Throwback Thursday is a photo of some sort.  I do have a photo included, but that isn't the throwback.  A smell is my throwback for the day.

I know that the smells can be a very powerful memory trigger, both good and bad.  Just the other day I was talking with my daughter about the t-shirt she was wearing.  She had commented that it smelled funny.  I knew it was clean because I had washed it not three days prior.  So I leaned over and smelled it.  She was right, it had a different smell to it.  First, it was dried out on the line.  (Side note: many people LOVE the smell of clothes dried on the line.  The freshness you get just can be beat.  However, living in the desert you risk getting the smell of dust, especially if it hasn't rained for two months.  I have tried to find a fabric softener that will last through the extra heat and wind we get at my house, but so far no such luck.)  Second, it had been in my daughter's wood (maple?) chest of drawers she inherited from my grandmother.  It is not cedar lined, but I'm thinking that should be added to my list of indoor improvements.

I laughed a little and told her that there was a bit of a stale smell, but that the shirt was fine.  In fact, it reminded me of my grandfather.  I don't know why, but all of his clothes had that same stale, stored in the closet near not the best wood, smell.  Even though my grandmother did all the laundry together, his clothes were the only ones with the smell.  I will agree that it isn't the most pleasant smell, and thankfully isn't the ONLY smell I associate with my grandfather, but it still brought back his memory.

Then this morning at work after putting an extra dose of lotion on my feet and rubbing them a bit (we could all use an extra foot rub a day, right?), I went to the kitchen to wash my hands.  The bottle of hand soap in there is Dial Gold antibacterial.  Nothing fancy really, but after just two pumps the memories came flooding back!

My grandmother strongly believed in hand washing.  There is nothing wrong with hand washing.  I insist on hands getting washed at my house too.  In fact, when I tend my great-nieces they're so used to it now, that when they get down from the dinner table they walk to the bathroom like a scrubbed up surgeon; hands in the air so they don't touch anything until they are clean.  I warned my husband about my grandmother's hand washing requirements before I took him to meet her.  He didn't believe me, until he experienced himself.  He asked me later if I ever had skin grafts done, because he couldn't see how I could still have skin on my hands after being raised by her.  We had to wash our hands at all the normal times; before and after meals, after using the toilet, etc, but also other times you wouldn't normally think of.  For example, if we had sat down to dinner and the phone rang or someone came to the door, we were not allowed to answer the phone/door OR sit back down to our plate until we washed our hands again.

The only soap grandma would use was Dial Gold.  For anyone who has used it, they can attest to the fact that it has a very distinct smell.  There was a bar in the kitchen, one at the bathroom sink, and one for the bathtub.  Grandpa didn't like it, so his bathroom had bars of Palmolive instead.

So while washing my hands after lotioning my feet this morning I was reminded of my clean handed childhood.  What smells remind you of your childhood?

Now, before I go on to my next task, I need to wash my hands....again. 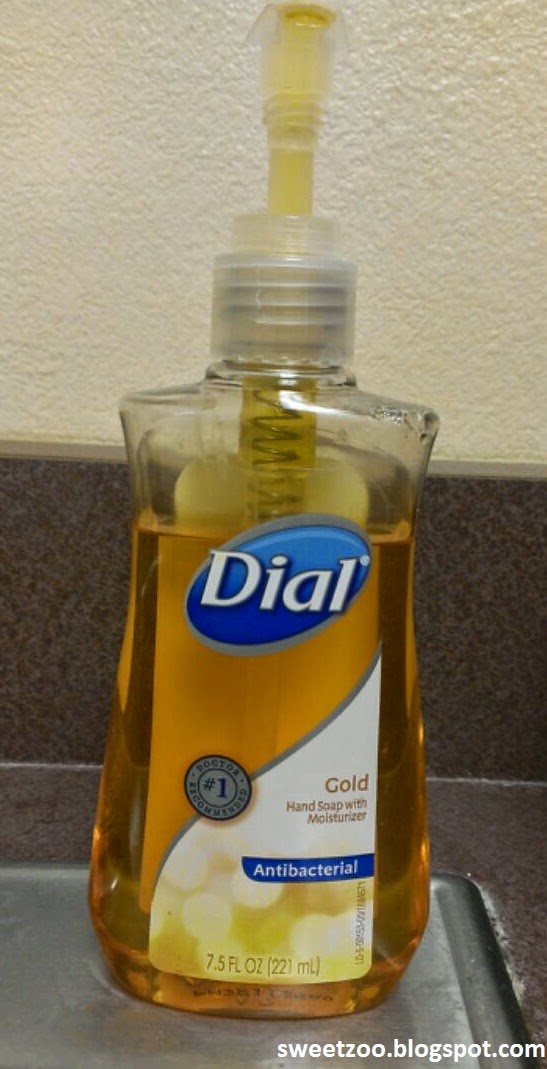