After finishing the stairs we stopped at the care right where we had parked.  It felt great to sit down, cool off, and eat food.  We even scored some free water to refill our water bottles.  Thank You!!

Our next stop was Hollywood Bullyvard.  (Yes, I realized that is not the official correct spelling however, that is now how I spell it.)


I wasn't too sure how the parking situation would be.  We totally lucked out with our parking at the stairs, but otherwise it had been pricey, and scarce.  Thankfully there was a lot that didn't bankrupt us.

We headed out to see the stars.

It was never discussed any particular names we had to find, or if we would walk across every one.  Keep in mind, we had just walked a ridiculous amount of stairs.

One of the first stars we came to was one that made me say, "Oh ya.. I'd almost forgot that he was a real person."  You see.. in the town that we both grew up in, the main road was Andy Devine Ave.  As a little kid I learned the name of the road, not the history behind it's name.  That didn't come until years later.

As we continued on you could tell that we are very much alike.  We would point out a name to each other, and it was usually said about a second...or less... apart.

There were quite a few we stopped and took pictures of.  Some I took were to share with my family.  Names my husband talks about, or actors from some of his favourite shows.  The same for my daughter...and my cat.

Yes.. my cat.  You see, we adopted this adorable white cat back at the end of June.  Her name, Gypsy, came with her.  My daughter decided that her full name (yes... my cats have middle names, how else are they supposed to know when they are in trouble) should be Gypsy Rose Lee.  My daughter is a theater major and an upcoming performance she'll be assisting with is "Gypsy", a stage musical made from the 1957 memoir of Gypsy Rose Lee.

We kept walking and randomly taking pictures of stars.

Growing up I always had a teddy bear with me, specifically a Winnie the Pooh bear.  In fact, stored in a secure location away from damaging elements is the second Pooh Bear I was ever given.  Had I returned home without a picture of Pooh's star I think my husband would have sent out a search party to find his real wife.﻿
One of the best things about not having a time schedule is being able to do anything we wanted to on a whim.

We did have to escape the sales pitch of a guy selling a tour to stars homes, twice.  He followed us.

We stopped at the Chinese Theater and looked at all the signatures and feet and hand prints of some stars. 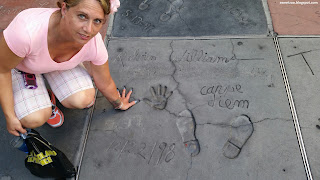 This did continue on with Jenna's undeclared goal of getting a picture of everything Tom Hanks.

As you can see, we also visited the wax museum.  I had quite a bit of fun standing next to the figures.  I will admit, a lot of them are creepy real.

After exiting the wax museum we encountered some street actors.  Now, I'm not sure what it is about Zorro, but the last time I was walking down a major street like this, and there were street actors, I also encountered Zorro.

Jenna was privileged to tap into her super power Spidey Sense.

This Spiderman actually cracked me up.  Here we are on Holly Bullyvard totally crowded with people and I believe he was a germaphobe.  These street actors accept tips and as Jenna was getting cash out she had to hold the bill in her teeth while she put other things back.  Spidey freaked out.  He said, "Ewww.. don't do that!  Don't don't don't do that."  He then took the bill by the very corner and shook it.  I couldn't understand how someone who is grossed out by germs could work in close contact with total strangers.  Then it dawned on me.  He was in a full body suit; no actual contact.  Nice move Spidey, nice move.

By the end of our walk across the stars we had walked across EVERY star possible.  There was one section that was under repair so we didn't see those names, but we walked across every other one, even the very beginning of the Walk of Fame.  I'm sure there were times we sounded funny.  Every time we stepped off the curb we moaned or ouched and laughed.  We were quite the pair.


You would think that we would have had enough walking for the day by this point.

After returning to our room and resting for a little while, it was time for dinner.  So we grabbed a few things... including our soda bottles... and headed down to the Santa Monica Pier.

This was when Jenna's Type Awesome status was put to the test, and proven.

The pier was about a mile and a half from our room.  It was after 8:30 and was dark.  We were not quite half way there when I didn't feel too good.  Before we left the room my blood sugar was on the lower end, but pretty steady.  To prepare for the walk I ate two fig cookies (20g of carbs each) before heading out.  I normally wouldn't have done that much, but we had already walked so much, and I knew that exercise would catch up with me.

I wasn't feeling well and I told Jenna.  We looked at my CGM and I was in the 70's with a downward slanted arrow.  That means my blood sugar was dropping.  I immediately reduced my basal to 0 (basically turned it off) for 30 minutes and we kept going.  I knew I would be okay, the cookies hadn't hit yet.  She didn't know I would be okay.  Remember those skittles that I had been carrying in my pocket?  We didn't.  They were back at the room on the table.  That's when she felt like she had failed.  It was her job to be me for the day, and she felt she had failed by leaving the snacks behind.  In fact, leaving the snacks behind made the situation more real.  How many times have we left home without enough snacks? I've done it more times than I can count.  You'd think after so many years we'd learn.  Nope.  All we have learned is to keep snack stashes everywhere; in the car, at work, in each room of the house, etc.  That doesn't help when you're not driving or at home.

I kept reassuring her that I would be just fine, and reminded her that the cookies hadn't hit yet.  She still worried.  We didn't sit down because I didn't want to, I just wanted to get to the pier.  She worried.  We kept talking and laughing about the stupid skittles.  She kept checking the CGM and worried.

We made it to the pier and found a place to eat.  By this time, my blood sugars had stabilized and were no longer dropping.  I had settled at a more comfortable 110ish range.  Jenna was feeling more relaxed, and her fingers stopped fidgeting.  I had a very tasty cheeseburger and fries, and she had a chicken sandwich.  We walked through the carnival area and had to laugh at the street sign we saw.

Route 66 goes through our home town.  We see memorabilia everywhere.  So to see it while we were on vacation was just hilarious.

We didn't ride any of the rides, it had been a long enough day as it was and we were ready to call it.  A picture of the ferris wheel and we headed back for some much needed sleep.

The walk back to the room seemed a lot shorter than the walk to the pier.  We kicked our shoes off and laid down.  Curious as to exactly how many steps I had taken, and how far I had walked, I looked at the status screen for my FitBit.  I was about two hundreths of a mile away from a perfectly even mileage distance, so I stood up and paced the room.  Yes, I actually did that.  Two trips from side to side and it clicked over the even mile.  I was happy.  I was exhausted.  And I was done.


That was a wrap of day 4019.  Jenna did an awesome job of being me.  She didn't kill me.  She asked questions.  She didn't judge.  And I believe she came away from it with a bit of new insight to what a day in the life of a person with Type 1 diabetes is like.

My birthday trip wasn't over yet.  We still had a day and a half before we had to be home.  An educating moment, a safari, and some interesting coffee.