You are worth more

Late July of 2013, a dear friend of mine lost his youngest sister, Amber, to domestic violence.

She was in her 30's with two small children.  These boys will now have to live their life without their mom... or their dad.

A week after Amber was reported missing, her husband was arrested and charged with her murder.  This last week his trial began.  You may check out the details here.  (warning: some of the testimony revealed gruesome details.)  It may sound more like a CSI episode than real life, but I assure you, it is real.  The jury found him guilty and sentenced him to life in prison.

A few days ago, while this trial was going on, there was a post to My Diabetes Secret that hit way too close to home.  The lady talked about hiding her diabetes.  She also addressed another poster who had wished they had an abusive father or boyfriend instead.  She stated that she was in an abusive relationship with her boyfriend...


"It's not easy to leave and go get therapy due to so many different factors.  Most people in abusive relationships never leave and sometimes end up dead over it."

October is Domestic Violence Awareness month.  If you or someone you know is dealing with domestic violence, please PLEASE speak up and seek help.  No one should ever have to live in fear in their own home.  YOU ARE WORTH MORE THAN THAT.   You can get out. 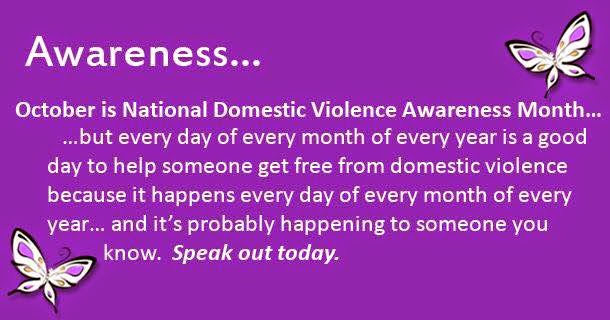