The second day of my birthday weekend started out fantastically!

Even though our exercise competition for September was already decided, we still got our walk/run in.  This time, however, it was on the beach.  Early Saturday morning, 7am-ish to be exact, we headed out and enjoyed the peacefulness of a morning beach walk.

As with all vacations and trips away from home, you should always be friendly and meet new people...or animals.  Sometimes those animals are real, and sometimes they will squirt water.

For 90 minutes I walked and listened and watched.  I walked a total of 3.69 miles.  I listened to quite a few chapters in my book.  I watched all the people.  There were small children dragging their parents into the water.  There were surfers waiting for the perfect wave.  There were military men running in full gear.. soaking wet.  People watching is so much fun.

After our walk/run we headed back to the room to get changed for the rest of the day's adventures.

Once cleaned and relatively sand free, it was time to hand over my diabetes management.  We had agreed weeks prior that on my birthday Jenna would manage everything for me.  She did quite a bit of homework prior to our trip and felt confident that she wouldn't kill me (I did promise her that I wouldn't let her kill us, so that was good too).  She also calculated how many days it had been since my diagnosis...4019.  Holy cow!  Anyways, while she was studying and calculating days I was planning and arranging so that I would need a complete insulin pump site change on that day.

She did great!  It didn't hurt and she learned a little more about my specific pump.  Win Win.  I handed her my Dexcom, she made sure we had the bag of Skittles, and we headed out.

So what do you think the first thing we did was?  Something touristy, yes, but not traditional.  Why be normal, right?  Find something different, unique, and totally story worthy.

Jenna not only researched diabetes, but also fun free stuff to do in Hollywood.  She came across a list of "Secrets Stairs of LA".  The night before we read up on the different locations and decided on the "Beachwood Canyon Stairs".  It is listed as 2.6 miles long, 861 steps, and would take approximately 1 hour.


"This is a vigorous hike through Hollywood history, utilizing some of the steepest and most charming staircases in the city, and affording breathtaking views from Downtown to the sea."

We found a perfect parking spot right next to a cafe.  It would come in handy when we finished and wanted lunch.

Most of the stairs were made from granite back in the late 1920's.  We could tell that not too many people opted for this adventure.  The stairs were in good repair, but there was leaves and overgrowth everywhere.

Don't be fooled.  Not all the stairs were this wide, but most of them were this steep...or steeper.

There was hardly anyone around.  The few people we did see were either locals coming and going from home, or construction workers.  We did meet one creepy little guy.

There were railings at each set of stairs, which was nice, because this set had a single unbroken run of 84 stairs.  Even with all of our exercise, that was a lot of stairs with no flat landing in the middle.

Even with permission to have shenanigans, we followed the rules.  In our stair guide it said, "Land panting at the top on Hollyridge Drive..." and that's exactly what we did.  This is where we took our first break.  I was reminded that I had been "So excited about the stairs" and we both laughed.  However, this break allowed us to view a fake castle wall.

As I stated, there was hardly anyone around.  For someone who isn't overly fond of crowds, it made the experience that much better.  Not only were we not getting trampled or bumped, we had unimpeded views.

It was at this point that we discovered the battery in Jenna's camera was dead.  She had fully charged it a couple days prior, but there was nothing.  Thank heavens for smart phones.

As we continued we came across the first set of stairs that went down.  Yes, I realize that technically ALL stairs can go either up or down, but we were following the rules, remember?

About this time I was beginning to not feel quite right.  Jenna had been doing a good job of watching my dexcom, and I had been hovering in a good range even with all the stairs, heat, and humidity.  However, I knew that I was dropping.  So we stopped and took another break and had a handful of skittles.  We BOTH had a handful of Skittles.  She figured that if she was going to be me for the day, she was going to be as me as she possibly could...anything I ate, she also ate.

Directly across from where we were sitting on the curb was this mural of Prince Valiant.

And directly at my feet was this unused (thankfully) poop bag.

Fifteen minutes later, and I was ready to start climbing again.

Our next stair case was the Granddaddy of the Beachwood stairs.  Originally built in 1928, it was declared an historical-cultural monument in 1991. 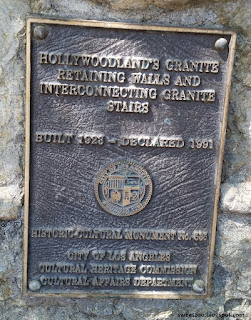 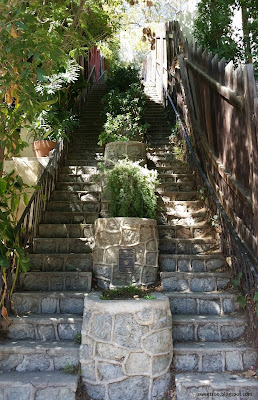 The center section, when originally built, was a stream.  Now it is planter boxes and resting benches.

As we climbed, there were doors on both sides that led to backyards.  One door in particular really stood out.  The colour was very familiar.

I'm not sure what we would have said if someone had walked out that door at that moment.  I know this, I'd still be laughing.

No good map following is complete without bad directions and getting lost.  We had that too.  One part says to go around a couple bends and there would be two white stakes marking the next set of stairs.  We followed around a couple of bends but didn't see any white stakes.  I knew we were missing something when I saw this sign.

In the map guide, this sign came AFTER the white stakes and lots of stairs.  So we back tracked.  We  found the white stakes...or should I say stake.  It wasn't after a couple of bends, it was across the road.  That's okay, I was really excited about the stairs, remember?

This set of stairs was the least steep and best hidden.  Even if it weren't for the white stakes hiding, the stairs themselves were so close to the houses that they were practically hiding themselves.

But remember I was so excited about the stairs.  Some could say that I was a bit TOO excited about those stairs that I was seeing things, like a pink elephant with painted toe nails.  Honest!  Our water bottles only had water in them.

Back on the proper path we got to the top of the neighborhood.  From this vantage point we had a spectacular view of down town.  The smog was even coorperating.

We had many opportunities to get pictures of the Hollywood sign.  I won't share them all here (there are already a lot of pictures), but we did need proof that we were actually there. 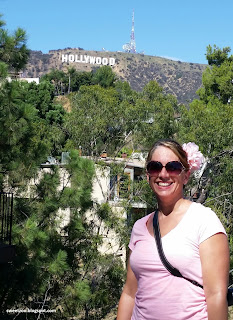 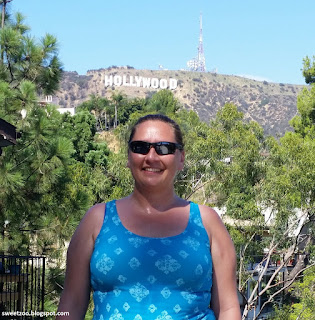 This was when we were almost out of water.  We planned on the hike taking an hour, and it was over two before we finished.  Our water bottles were running dry.  We thought about talking to the construction workers and asking for a fill up.  There was even a guy that drove in to a driveway with a bag of ice in the bed of his truck.  When we saw him lift the case of beer out of the bed as well, we figured they probably wouldn't be willing to share the ice.  In the end, thievery was the solution.  We found a garden hose out front of a house that actually had water to it (the first one we found wouldn't work at all).  A quick glance around and talking in hushed tones, we filled out bottles.  Shenanigans.

We came across a HUGE castle like wall.  Far up in a guard's hole there was a stone creature that looked like Yoda.

Guarded well, this castle wall was.

Continuing on we were able to locate Lake Hollywood.  We could have trotted on down to the shore, but we settled on a picture from up top.

A few more corners to turn and we came upon our final set of stairs.  It was bitter sweet.  Not only was the leg of our adventure complete, but we were going to be able to have lunch!

This concluded our adventures in stair climbing.  It took us two hours to complete the path.  Not bad considering we had to back track at least a half mile.  Jenna did a great job in keeping me alive and managing my diabetes, but it was only 2:30pm and we still had a lot to do.  She was truly earning her "Type Awesome" title.